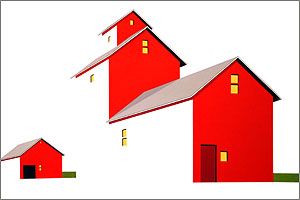 William Steiger’s new paintings use a thoughtfully painted object-as-subject to create a world imbued with psychological and existential riddles.

The flying machines and intricate, open patterns of steel structures that were the focus of his previous paintings have segued into a new group of barn-like structures. Whether or not they are habitable or industrial seems of little importance. The hidden interior promises a seductive mystery. Some familiar subjects, such as water towers, phone poles, silos and semaphores continue to figure in this group as well, each placed in Steiger’s vast distances.

The new buildings, which the artist calls “Elevators,” represent the greatest leap in terms of divergence from his earlier bodies of work. In these works, Steiger’s characteristic neutral palette has shifted dramatically. He leaves the lit face of his subject the same white as the background, producing a surface that seems filled to bursting with light. The buildings are therefore defined by deep shadows, which are sometimes the bright reds or blues of his new vocabulary, more often a rich eggplant that seems bottomless in the brightness. Softer shades of lilac or cerulean serve to define only what we need to know about the subject's shape. Certain lines are omitted altogether, causing the white of the building to merge with the white of the background, if only the eye would stop filling in the difference, insisting on making one or the other a slightly grayer hue.

Because of his use of light and color, the white elevators do not seem to be actually painted, but rather painted around, raising the question of their solidity and existence. And Steiger uses his paint subtly, so that the medium never seems to stake a claim in the tale. The pigment is the only characteristic that has weight.

There are exceptions in which the building is composed of bold color and shape. In one, an unusual octagonal building is painted entirely in various shades of bright red. In another, red ocher silos surround a mostly hidden structure.

The light is clearly the open-skied, Midwest farm light that leaves deep tight shadows on the ground around any objects. But beyond being from above, it is without a source, leaving the impression that one is wandering in a psychological room of one’s own interior, or a dream. The landscapes around the structures appear to be farmland at first glance, but being totally devoid of people, action or the greenness of growth, we must opt instead for symbolism. The object is made a monumental icon in its stark beauty, and we are left undistracted by background.

The lack of detail, the brightness, and the stillness bring to mind old faded photos with all that they imply: a personal history with its own attachment of intensely personal emotions.

Steiger paints from memory. His memory of the subject and his perception is what directs the composition. The painting process adds another layer of shift to the images. Occasionally a thin over-painting of ground obscures an object, where its ghostly presence serves to underline the sense of fleeting reality of the place. For even the denser, dimensionally painted subjects become symbolic in Steiger’s ethereal atmosphere.

The viewer has a sense of self as a visiting presence within the painting, invited into a panorama which proffers no other form of life. There is not even a living tree to which we may feel aligned. It produces a feeling of exposure and vulnerability to whatever experiences lie in wait. Being suspended between the blinding light and an unknown and extremely profound darkness, between what seems an unending, sun-beaten plain, and an interior which conjures images from deep within ourselves, evokes in the viewer an almost paralyzed enchantment.

Looking at these icons, I shift between seeing a portrait of a building, a place, or perhaps the artist’s own past. It might be a sign with a cryptic message to disclose, or a dream. Reminiscent of the computer game in which one explores an environment, I can’t shake the conviction that behind every door there is a labyrinth that will enlighten or terminate. Like a Rorschach test, these paths to dark doorways have summoned an onslaught of my own imagery. The projected inner stairways climb to the locked tower of personal, yet heretofore unexplored symbols with myriads of meanings. I interpret both this tower, and the sense of ascending arrival as a visit to the ever-guiding, hoarding and secret subconscious. It is eerie to entertain the idea that since this painting is not my own creation, I am somewhere I don't belong. The water towers, and other such containers which do not extend the same invitation to enter, also hold these same aspects of personality and the sense that they are keepers of something. Separated from the contents by my inability to enter, there is more of a truce. The interaction is more secure.

Steiger’s panorama, as an external portrait of place, is suggestive of memory and longing. I feel obliged to continually ask “what is its relationship to me, or mine to it?” As an internal symbol it is challenging, constantly changing, as elusive as the knowledge we hide from ourselves. We are teased with a dichotomy of a seductive peace, and an unnerving isolation. The scene is evocative of purgatory, not in terms of punishment, but rather of waiting for insight. There is a strong pull to stay in this place until the secrets are unlocked and we are made wise. At the same time, the present existence seems fleeting, as a dream that will be snatched away by waking. To entertain the prospect of entering one of Steiger’s doors means we must imagine ourselves removed from this already fragile state of existence, to an unknown end. This serves to make the doors impenetrable, and the sense of our own mortality a presence to be reckoned with. Despite the tangible loneliness, there is something refreshing about the solitude, and the questions of existence. Perhaps these containers which while foreboding, are also the means of protection. I feel that some essence is safely guarded; is it emotions, psyche, or life itself?

I thought, while pondering my reluctance to disengage, that there certainly is eternity in Steiger’s distances.