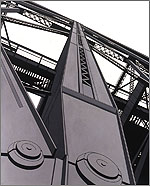 William Steiger offers a unique vision in New Paintings at Pentimenti Gallery. His work one-ups realism, as it is marked by an aesthetic distance that streamlines what is depicted through a sterile detachment. This is more of an ideal of form that nonetheless brings the viewer in closer to the oeuvre. New Paintings offers water towers and grain silos, meandering waterways and farm buildings. Think Kansas in how the flatlands of the plains are dotted here and there with structures necessary to maintain life

Coldwater defines the water tower as a stoic Colossus that lifts to the sky, its structure transcending mere metal to become alive and beyond into the realm of sentience. This is neither altar nor idol, but deity itself, and as it is surrounded by small lakes, one doesn't know if it draws sustenance from the water table below or if it in fact feeds the earth, no matter its central core.

Yet the perspective is skewed here via the presence of power lines, in that they must be impossible in their height, thus distorting the reality of what is depicted. As for the composition itself, the clinical situation at hand further pushes this picture into a state of disbelief, along with the emptiness of the landscape, which affords it to be as much a dream as a god.

Water cuts a broad swath through land in Ess Curve. Here, a river extends across the foreground, snaking for the horizon. Flanking this waterway is a checkerboard of land delineating fields and pastures, each one a block of pale color, shades of tan, brown and green, all interspersed with tiny flecks of farms and barns alike.

The sky is a blank expanse of pale ivory nearly the same shade as the river, but what’s seen in the water is no reflection, but rather its own emptiness. There is a touch of the classical in the perspective here in that the distance is distended, as if tugged flat from afar, with every detail surrendered to space and time, a process that dwarfs the presence of humanity.

A curious mirror effect is offered in Hay, Feed and Seed that subverts the logic of the compostion. Two identical barns, all angular American Gothic planes, stand side by side, while two identical roads run in front of them. These doppelgangers are stoic, the only difference between them the placement of windows, while the roads are equal but for their finish. The hallucinatory power here is furthered by an absence of outline of the buildings.

While the walls facing the roads are a rusty shade of red, the other walls are white, as is the background of the painting. There is no edge of the building to meet the sky; instead just white bleeding into white, with the suggestion of finality the roof of an adjacent attached shed and its window floating free in space. New Paintings achieves the impossible, as it gives artifice a good name.

William Steiger’s paintings of water towers at Pentimenti Gallery recall the precisionist movement of the 1920s and '30s, which featured industrial buildings and landscapes rendered precisely and dispassionately.

Precisionist art romanticized subjects such as factories and locomotives. Steiger’s paintings are more like stripped-down meditations on structures integral to rural life-not just water towers, but windmills and grain elevators. The resemblance to the earlier movement resides mostly in the way Steiger draws, with thin, tightly controlled lines similar to architectural drafting.

A minimal palatte of brown, tan, ochre and barn red suppresses narrative references, causing the viewer to concentrate on the purity of the forms. All the skies, and the rivers in two landscapes, are bleached white, reinforcing one’s perception of these utilitarian structures as vernacular icons. By emphasizing stark linear patterns, Steiger makes the commonplace exceptional.