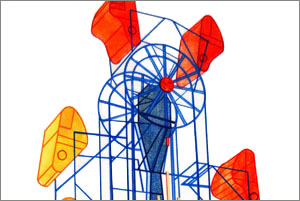 
Marcia Wood Gallery is pleased to present William Steiger: dreamland, a collection of new paintings and drawings.
William Steiger’s dreamland, named after one of Coney Island’s three original amusement parks, draws from observation, memory and imagination inspired by a bygone era. This is a place where, as in our subconscious, one memory may be recalled in exquisite detail while another is obscured, like the edges of an overexposed black & white photograph. The intricate web of a Ferris wheel, an aerial tramway gliding along a delicate cable, landscapes as imagined from the perspective of an airplane, and stark, yet colorful, rural architecture all feel familiar and entirely fresh at the same time. Steiger’s work has grown increasingly abstract and reductive yet the seemingly simpler compositions ultimately communicate more through their sparing directness, such that within his sublime spaces there is a tension created in part by what is omitted. The subjects have become more colorful and the backgrounds a more brilliant white. This whiteness may represent the land, or a surface, or sky, or water...or all of these simultaneously within a single painting as the resulting forms rise from, and meld into, the landscape in which they appear.

William Steiger’s paintings and Toni Hafkenscheid’s photographs are a beautifully complementary pairing of artworks that plunges you into a warm bath of nostalgia, evoking the kind of phantom limb ache for a time or a world never even experienced.

Nostalgia seems to run on a fuel of such delusional imagination. The saccharine images of Norman Rockwell or Thomas Kinkaid, for instance, offer Ameritopian worlds few folk have actually lived in outside the narrow window of childhood.

Steiger and Hafkenscheid are birds of an entirely different feather. They are enablers of that comfort jones but conceptual artists who use formal techniques to create an illusory world we are encouraged to question, or at least ponder as a fiction. The artists feel like our collaborators, as eager to play along as they are to pull back, happy to set the stage for our desire, but self-conscious in their stagecraft.

In his accompanying dreamland exhibition of paintings and drawings, New York-based William Steiger also isolates his perfect, crystalline visions of American life. Steiger moves in even closer than Hafkenscheid to his objects, which distill our sense of the past and push our nostalgia button. His images of train cars and fairground "Wonderwheels," "Aerial Tramways" and old-fashioned grain elevators reduce the past to its iconic industrial and architectural forms. His paintings are a language of form where backgrounds are blank and white, the better to highlight his exquisite objects.

Over time, Steiger’s work (this is his fourth solo show at Marcia Wood) has become more minimalist, as much about what is left out as what is included. In the same way minimalists use form or color, Steiger uses architecture. But while the images are pared down and streamlined, they are far from cold. They propel us directly into the sensibility of the past.

And many will find themselves eager to be carried along. (Felicia Feaster)