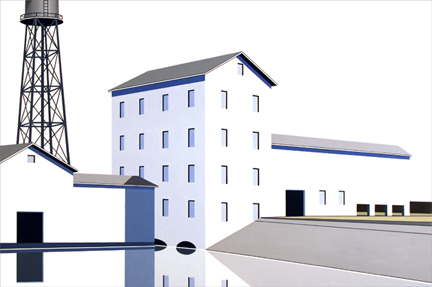 Steiger’s pared-down views of mills, factories, railcars, water towers, and landscapes offer neither judgment nor sentimentality. Drawing on the collective memory of an imagined future, Steiger employs expert editing to create clean, seemingly objective icons of often-romanticized elements of the industrialized world. Devoid of traditional landscape signifiers—a clear horizon line, shadow, or ground—the paintings take on a surreal clarity, as if one sees the iconic objects of this collective memory in a newer, purer light. His steadily painted lines, just shy of the draftsman’s fabricated vector, are imbued with a human quality that coaxes the viewer past the unsettling realization that the buildings are in fact abstracted geometric forms floating in space, and into a comfortable intimacy with the subject at hand.

Manufactory also showcases several new collages by Steiger. In experimenting with the translation of his imagery to the assemblage of small pieces of paper, Steiger found a new range of possibilities. He explains, “The materials and tools of the medium—paper, knife, and glue—allow me limited means to create pictures that emphasize their cut-out nature while forming complete multidimensional worlds.” The artist’s volumetric and perspectival spaces are contradicted by his emphasis of a flat picture plane, and it is the resulting tension and visual play that is his ultimate objective.

The work in Manufactory evolved from allowing the collages and paintings to interrelate. Richer and more complex than their starkly gessoed counterparts, the collages combine elements of found paper, navigational charts, marbled endpapers, maps, and text, yet maintain a fidelity to the classic Steiger imagery. In turn, the new paintings have begun utilizing the layering elements of the collages: in Flyover, an airplane navigates over parceled farmland, in Luftseilbahn, a tramway appears to hover over a snowy mountain.

William Steiger received an M.F.A. in painting from Yale University in 1989. His works have been shown extensively in the United States, and included in exhibitions in Europe and Korea. Pace Editions recently published two new prints by the artist. Steiger’s works can be found in many prominent corporate and private collections.

Concurrent with this exhibition, a major monograph of the artist Transport: William Steiger will be published by Hudson Hills Press. In addition to over 200 color images, Richard Vine and Christopher Gaillard contribute essays and eleven additional authors introduce each chapter heading.

Margaret Thatcher Projects is located in 539 West 23rd Street, ground floor (between 10th and 11th Avenues). Gallery hours are Tuesday through Saturday from 10 am to 6 pm. For further information contact the gallery at: info@thatcherprojects.com, or 212.675.0222.