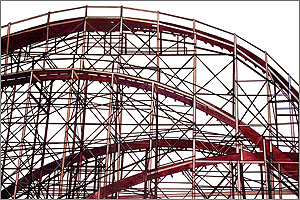 A straight line is impossible; we know this from physics—a line is always curved and, moreover, formed from incredibly small dots in succession. This axiom refers both to the evident contradictions between the “micro” and “macro” worlds, and to the seemingly obvious world—the visible world—that turns out to be an illusion of sorts. We know in our hearts and our heads that things aren’t ever what they seem to be, but we trust our simple daily vision. Our eyes create images; we consider them “real” because they appear to us habitually—in a conventional physiological sense and from a cultural agreement that we are talking about the same things. Yet, despite the inherent contradictions, we still use the straight line as a metaphor for efficiency and honesty. For the life of us, we can’t reconcile our highly-developed scientific knowledge of moving atoms and active, micro-cosmologies with the apparent stability and solidity of geologic objects—such as islands—or train cars. Our perception of reality places us, always, betwixt and between.

By admitting to the impossibility of his goal, through brushwork and handwork Steiger’s art has the advantage of being imbued with a startling intimacy. The handmade lines do not fetishize a métier or craft but, instead, act as a measure of the unbearable unreasonableness of the task, against the surface look of assurance emanating from the image. If Steiger were to use the tools and technologies that allow an even greater diagrammatic and graphic look, the relation to the reference would be obscured and abstracted too distantly to be legible to emotion. What Steiger does is so subtle and nuanced that it is almost invisible; his artwork insists on a visceral relation to the body of the spectator—his or her eyes are partners to Steiger’s illusions. He holds to this imperfect phenomenology of vision (his and ours)—of seeing an object in a quintessential time and space. He allows spectators an opportunity of skeptical speculation; they may inquire about—and discover—what is still vexing about the ruptures and extractions of the familiar.

One of the ironies, then, in a painting or a drawing or a print by William Steiger is that—aware of both the constraints of vision and the history of art and popular culture’s compelling and persuasive images—he creates and carefully maintains lines and areas of negative and positive space that deliberately produce the illusion of a visual perfection. But, we are now cognizant that it is not really “perfection,” and we become complicit with Steiger in knowing that. At best, his work is an eerie fabrication of the perfection that a diagram or other visual explanation might display. Each image is already cross-referenced to another cultural image, which, in turn, is already cross-referenced to its own cultural image, which itself is intrinsically cross-referenced to another, and so on, in a gentle mise en scène to infinity. Not incidentally, Steiger’s images play baroquely with their “original” sources, not being mimetic but, rather, elaborated and arbitrary imaginative reconstructions. Their perfection was corrupted in advance; they are part of an historical vocabulary of imperfect “perfect” images. When combined, they nullify the possibility of idealism—notwithstanding the well of intentions. As a direct result, Steiger’s incredible use of line, space, and color within a given image forces on us a necessarily contingent image—vulnerable and irresolute regardless of its confident geometrical stance. Only this initial imperfection could allow us to consider anything else—like our knowledge of lines. This slightly madcap activity of Steiger’s is as modest as its tongue-in-cheek ambitions and consistent with the way that the scale of the work announces itself. We see the strength of these highly economical compositions, long after we understand their circuitous journey to delivery, in their wonderful concentrated intensity. Their aesthetic and symbolic appeal holds us in their calm wake’s sway. We are poised between what we see and what we know.

Steiger has chosen relatively innocuous subjects—ones that we think we already know everything about—so mundane that they have been almost banished from the American iconographical environment. Onto them, he applies a strenuous and rigorous template of contemporary conceptual and perceptual precision, to produce a re-presentation. Because we know them, or think we do, the images become like a scene from memory—unexpected, pensive sources of stored narratives and forgotten emotions. If memory best serves us at a time of crisis or need, then these images, he seems to suggest, have that cultural role to play, too, as sudden reminders of something significant—necessary, but almost lost—recovered now for a purpose. Dumbstruck and down, but not out, their cultural muteness—reverberated by their flatness—is a given a voice again: a moment on the stage for one last bow.

The handmade artifact, which Steiger’s work exemplifies, is always in resistance to the grain of digital reason and other new media opportunities. But, this doesn’t make such work “Romantic” in the historical sense—where the mark of the hand served as an analogy for a beleaguered humanism. Steiger, for instance, definitively aligns these works stylistically to a generation of empirical minimalists through the use of grids and geometry, repetition—even redundancy—and an almost puritanical obsessiveness with labor as a value in itself. Just as importantly, his emphasis is on the phenomenology of re-presentation—the mysterious cipher of representation itself. Like Pop artistry in general—one thinks of Roy Lichtenstein, in particular, here—Steiger emphasizes the character of a representation in a graphic form with unlikely and unexpected color aspects and accents. These choices are out of tune with “reality,” but at home in popular culture and other “debased” aesthetics (like decoration). His use of whites is the ultimate creation of a “floating signifier,” inferring spaces that reference sky or ground or sea or the abyss, per se—allowing a viewer to fill these empty vessels of space with their own imaginings or desires. These representations, then, refer more to a history of mediated images—shadows of the real—than to the actual objects to which they seem to allude; not uncommonly, they are inspired by photographs, rather than by the objects themselves.

Using these highly exaggerated sets of whites as the shining non-color par excellence, occupying positive and negative spaces at will, Steiger paints his centralized images as though a blinding light has startled them into a trance-like state: mirages caught in a nanosecond of cognitive lucidity. Their ordinariness becomes dramatic. In Steiger’s bleached landscapes the whites are heightened as in the alchemical moment when photographic paper in emulsion just begins to give up and perform its magic of re-presentation. By insisting on this moment, and pressing on its incompleteness, Steiger is posing questions about the nature of the relationship between vision, emotion, and memory. How and why does an image stay rooted in our minds? How does memory affect an image even while we are looking at it? What is the nature of mediation—the various glosses and veils that hang between reality and us in any ordinary moment? The blank slate, the tabula rasa, actually has visual echoes—erasures not forgotten, or, conversely, just about to be again.

Steiger’s narrow choice of images becomes more evident when viewed as a set and more significant as we contemplate these questions. Although the images could appear to verge on nostalgia, they represent, instead, something like an edited comment on a recent past—an era of modernism which reflected both mechanical values and idealistic pursuits, an era no longer tenable as a subset of “progress.” These are images from deep within a modernism now fading, almost eclipsed; but, as Steiger makes clear, not quite out of sight and not quite as familiar as we led ourselves to believe. These images act like a faint memory on the edge of consciousness—slightly testing us before our movement into this present future. We see grain elevators from a time before corporate agribusiness, euro aerial tram cars of an earlier mechanical age, a telephone pole and an electric light from a pre-cell phone rurality, shockingly complex entertainment rides (with names like the Wonder Wheel and the Zipper and the Cyclone) from the beginning of the last century, and a train’s caboose sinking into the white of the canvas as though even the authority of “art” can’t sustain its image much longer. These mnemonic devices signal a clear sense of loss, eminently sustained by the lack of human or machine activity. Absent of any natural forces or any other contextual elements, it is anonymous and world-weary. At the same time, for a moment on the wall—but, actually forever—there is a momentary redemption: a flash of potential recovery.

It is as though, in producing an image in this painstaking and attentive way, Steiger finds not only a latent poetry and pleasure in looking back, but, also, a deliberate wonder about the possibility of clarity. The whiteness within each frame, each artifice Steiger presents, inspires a deeper speculation as to what was and therefore what might be. These enlightenments from meditation and contemplation are an anti-modernist effect—signs that are contrary to their complicity with the modernist icons of industry, and they deliberately demand reflection on their very survival. It is as if Steiger is asking us not to make history in the same way once more—to abandon déjà vu. He invites us, inspired by our discarded cultural images, to discover and rethink a renewed sense of the usefulness of wonder, to inquire about its possibility again—even as a whisper in a snowstorm.

go to Ghosts in the machine