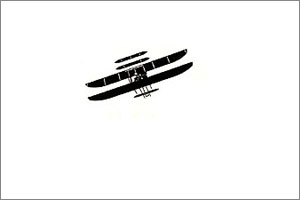 May 2002
by Hitomi Iwasaki, Associate Curator Queens Museum of Art

William Steiger’s paintings allow his imagination and our collective memory to merge to shape “reality.” Steiger’s subjects are bridges, towering structures, and flying machines from the first half of the 20th century. He often paints these magnificent constructions that once epitomized progress and technology, as well as landscapes from an aerial perspective. “Parachute Drop” (2002) elicits the viewer’s awe with the grandeur of its physical presence and the dazzling beauty of an intricate iron web rendered in an exaggerated upward perspective. However, Steiger’s revisit to Precisionism does not replicate Charles Sheeler’s celebration of the industrial sublime. Instead, he willfully guides the viewer to what has become peripheral in today’s American consciousness. His paintings are meditations on the remnants of technology not without irony or sentiment over lost innocence.

“Tunnel” (2000-2001) is a line-rendered geometry that deceptively resembles digital imaging. While Steiger’s emphasis on line and stoic color scheme makes a crisp realism, it often lapses into abstraction with his idiosyncratic formal reduction: partially abbreviated contour-lines confuse the spatial depth of the picture plane in “Oil Derrick” (2002); ghostly traces of reworkings remain visible on the canvas in “Crane” (2002). Steiger’s pictorial obliteration of lines and planes is a system that defies a clear-cut literalness and asserts the subject through memory.

Steiger’s paintings never suggest the presence of a living soul and the skies are ascetically rendered like a bright vacuum. As a result, many of the objects in his depiction appear seductively anthropomorphic—as if they are portraits rather than landscapes about human aspirations and the idealism of the modern era. Steiger’s industrial relics do not exist to evoke a sense of nostalgia about heroic modernity, but to signal our shifting perception on the iconic visions of Americana now and then.

go to Ghosts in the machine