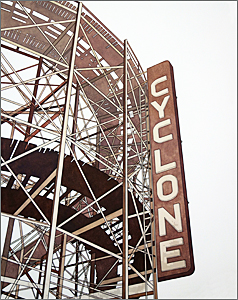 Explorations and Surveys (by Dan Piepenbring)

William Steiger's collages are wonderous, often humorous refractions of early American landscapes. They traffic in a particular kind of anachronism, grafting zepplins, prop planes, gondolas, bridges, and the gleaming apparatus of the steam age onto the vast plains and prairies of the nineteenth-century frontier. The images dare us to reconcile two equally innocent visions of American life. One is taut, sleek, and brimming with technological optimism; the other is lush, free, and unspoiled. Neither, it goes without saying, have quite panned out as our forebears hoped they might.

The series, “Explorations & Surveys,” plays with our country's mythology, conflating more than a century of travel and invention into pale stories of our naïveté—everything in the world of these images is still ours for the taking. Steiger constructed the pieces using a nineteenth-century surveyors' guide. His gallery, Pace Prints, explains:

Steiger borrowed the abbreviated title, Explorations & Surveys, from the title of his source material, Reports of the Explorations and Surveys to Ascertain the Most Practicable and Economic Route for a Railroad from the Mississippi River to the Pacific Ocean. These accounts were published by the Federal Government in the late 1850s to both document the western regions and to locate the best routes for the forthcoming Pacific Railroad. Disseminated in bound editions, the volumes were essentially the first published images of the American West.

These works, and others, are on view at Pace Prints Chelsea through February 21st...

In Mr. DeMarkis's sixth grade class, a few of us managed to spend lots of time doodling. Usually the subject matter included some combination of spaceships, Arnold Swarzenegger, and roller coasters. Coasters were the specialty, zooming, looping and twisting in impossible configurations, sometimes requiring rocket-enabled cars or leaps across starry chasms. Sure, we knew that the trestles and struts we improvised probably wouldn't support a real coaster's weight, but they were close enough for our needs. We were collaborating on a group fantasy, constructed with real-ish objects intended as plausible actors in an open-ended story.

I'm reminded of those drawings the more time I spend with William Steiger's paintings, which are built out of similar reveries. His work, of course, is produced with a level of focus, clarity and skill far beyond the casual doodles we were cranking out, but there is something similar in the gee-whiz adoration of mechanically complicated contraptions, and moreover in the way the paintings show more-or-less plausible objects that sometimes belie their own origin in an objective world of fact.

Take for example, 2011's Blue Wonderwheel, the latest in an ongoing series of renderings of Deno's Wonder Wheel in Coney Island, and part of Steiger's show Manufactory at Margaret Thatcher Projects. At first glance, it appears to be a competent, draftlike rendering, but on closer inspection, lines appear to cross in front of each other in wrong ways, struts entangle, the whole interior support system loses itself in a spiderweb, and the likelihood of this image corresponding to the real-world attraction breaks down. Instead, the painting becomes a kind of contradiction, either a faithful rendering of an incorrectly-remembered object, or (and this is more likely) a self-reflective and somewhat mischievous exercise in which some reveries deflect others, dreams dissolve in midstream, and objects imply both their own selfhood but also leak out into other identities.

In Steiger's world of objects, these kinds of contradictions pop up often. For example, in Cyclone III (2011) the tangle and insensibility of the coaster's struts only become evident after a beat or two. In most of his recent aerial paintings of planted fields, the machined regularity of the landscape, smoothed-over features of river arcs and banks, and artificiality of the view are enough to both imply and refute a specific locale. And in paintings of manufactories and farm buildings, the occasional impossibility of the placements of certain windows, gables, or volumes only occurs to you after a few moments.

Steiger paints several kinds of subject matter, usually in ongoing sets: funiculars, train cars, roller coasters, biplanes and zeppelins, tunnels, granaries, railway semaphores, all highly articulated forms that can withstand his rigorous reductions of detail without losing a sense of directness and concision. Steiger chooses to give enough detail, enough referent, but not a bit more. The overall effect is the concentration of emphasis on small pleasures of hue, texture, and composition that are folded into a depiction of otherwise iconic and distanced objects. These paintings reward a bit of patience, opening up to reveal warm subtleties after initial bold and graphic introductions are made.

Over the past several years he has alternated between stripping away and then adding back identifying details and features to his images, oscillating between object and scenario in a way that suggests a slowly evolving narrative anchored by specific-yet-ambiguous locales and memories. Recently, bits of background—mountain peaks, colors in the sky, objects toward the horizon—have been surfacing. Throughout, his subjects remain something more than visual signposts, yet other than realistically depicted landscapes.

Steiger is often described as a kind of neo-Precisionist—a successor to the lineage of Sheeler and Demuth 70 years on. Certainly, affinities with that school exist, but just as much with other movements. For Steiger is evidently too aware of too many things that fall outside the Precisionist program: the ongoing history of procedural abstraction, the timeless currency of sharp design, and most of all the slipperiness of memory. The persistence of his fascination anchors these paintings: both bold and subtle, these works manage to wink both at an age of technological optimism and at the romantic nostalgia attending its decline.

Steiger gets Maximum Impact from Minimalist Landscapes (by Margaret Hawkins)

Selective viewing is essential to sanity. The human brain can only process so much information at once, and those whose brains don't shuffle, edit and erase most of what they see and hear go mad. Order makes understanding possible.

On the opposite end of this spectrum of perception is painter William Steiger, the owner of an orderly eye if ever there were one, who selects only the most pleasing and succinct details from a tacky and complicated American landscape and paints those in flat color and high relief against otherwise blazingly blank backgrounds of whiteness.

Cable cars hang in mid-air, held up by the thinnest of wires. Watertowers—those lighthouses of the prairies, skyscrapers of the great plains—stand stark against blank white skies. Rollercoasters, Ferris wheels, railroad bridges, tunnels: These are Steiger's humble icons of perfection. A train caboose is reduced to an abstract pileup of geometric shapes in red, black and gray. The apparently sun-bleached walls of a grain elevator disappear in the whiteness of the background.

The effect of this minimalizing technique is almost musical, the isolated objects look the way a few notes sound when they are surrounded by silence. The white acts as a pause that allows us to “hear” the thing because Steiger has eliminated so much environmental detail. Fashioned with the same attention to precision that designers gave to the machines and buildings that inspired Steiger in the first place, each painting is a perfect invention.

Together, the body of work seems like an homage to the mathematics of engineering, with each object illuminated by a cleansing, almost blinding light and without a trace of human presence or sentiment.

Steiger's work approaches abstraction in places and there is a sense here that if a few more edges were removed, the literal meanings of these paintings would dissolve into planes of flat color. It is Steiger's genius, though, that they don't have to lose their literalness to keep our attention.

Steiger has set the ideas in his paintings in motion and then he steps back to admire his craft and to watch them work. Refreshingly, there is no sense of heated artistic ego or creative chaos here. Just the opposite—Steiger makes paintings that instill a cool sense of order.

The hard-edge, flat quality of his paint handling is fitting for the mostly architectural forms. Although rendered freehand, the edges are crisp and precise. Color is often more arbitrary than perceptual. In “Blue Mill” (60 by 48 inches), for example, the windows of the all-white edifice are an electric cerulean blue. Steiger's earlier paintings also depict man-made objects—a bridge, a lighthouse, an airplane or signal towers—within a nonspecific landscape, yet, unlike his new work, they do not rely heavily on negative space. In his recent pieces, the untouched gessoed ground is as much part of the image as are the precise shapes painted in oil. In “Elevator V” ( 60 by 48 inches), a row of grain elevators recedes in one-point perspective. The sides of the buildings that are in shadow are rendered in subtly varied values of dove gray; the sunlit areas remain the untouched white of the gessoed ground. Although the image reads correctly, the viewer is left to differentiate where the buildings end and the sky begins.

In a series of paintings of cable cars, ranging from 10 by 8 to 60 by 48 inches, either one or two intense red cars are suspended on cables that enter the composition at one edge and tilt downward, then off the canvas and out of sight. The background is either white gesso or blue “sky,” with no suggestion of where the cars might have originated or where they might be headed. The viewer is invited to imagine what occurs in the space outside of the canvas.

At his best, Steiger plays visual games with the viewer. “The Ride” (60 by 48 inches) is a green and ocher rendering of the Wonder Wheel. Designed by Charles Herman and constructed in 1918-20, the Ferris Wheel-like ride consists of eight stationary cars and 16 others that roll along interior tracks. At first glance, Steiger's painting appears to boast draftsmanlike accuracy, yet upon closer inspection, discrepancies are revealed. The lines delineating the wheel seem to become entangled or follow illogical paths, and the tracks appear to turn back on themselves. Here as elsewhere, Steiger revels both in verisimilitude and in pointing out the inherent artificiality of visual language.

William Steiger is a painter with a hands-on approach to printmaking. For his recent etching, “The Mill” (2004), he established strict technical limitations for himself: the full-color etching was to be printed using only two colors—vemillion and blue, from only two plates. Working closely with Kathy Kuehn and the other printers at Pace Editions, Steiger used a combination or soft-ground etching and aquatint. He established the image's basic combination with the etching, then used a stepped acquatint process to create the solid areas of color. Isolated parts of the plate were etched for different lengths of time so that when the two plates were printed on top of one another—wet ink on top of wet ink—the colors mixed to create a range of seductive hues, including bright red, orange, various shades of brown, near black, and tones between royal blue and violet.

The technical facts are simple—two colors, two plates—and complement the austerity of the architectural subject: a structure that, in its clarity of form, has a Shaker-like presence. Steiger deliberately left out details in order to emphasize the images's formal qualities. The right edge of the main building, for example, is implied by the relationships between shapes and colors and exists only in the mind of the viewer. It is this penchant for abstraction and sense of color, combined with matter-of-fact technique and subject that lends this print an unexpected magic.

Destination at Holly Johnson/Dallas and Transport at Margaret Thatcher/New York, 2008